Posted at 23:24h in Gmail by Sead Fadilpašić
Share

One of the more useful features that were available on many other email providers, but not Gmail, was sending multiple emails as attachment in a single email. Up until now, if a Gmail user wanted to send multiple emails to a recipient, he or she needed to forward each email individually, consequently flooding the recipient’s inbox, unnecessarily.

However, Google has now addressed the issue and has brought the new functionality to all Gmail users. This means that the obnoxious practice of sending multiple emails because of the older copies in the thread is being eliminated.

As we have grown to expect from Google, the entire process is relatively simple. Users that want to send multiple email threads as attachment need only select the threads they want to send, and press the three vertical dots located under the search bar (the three dots represent the “More” button in the menu).

In the dropdown, find the “Forward as attachment” option, which will allow you to send the email directly. Both Cc and Bcc fields also work with the new feature.

Go ahead, try it out! Keep in mind that Google is gradually rolling out the feature, and there is a chance that you just haven’t gotten it yet. The social media giant also said that the roll-out for this feature for Scheduled domains will begin on January 13, 2020, while roll-out for Rapid Release domains will “continue as planned”.

There is another way to attach older messages in a new email – by right-clicking the message, then dragging and dropping it into the message body. All emails that are sent as attachment will get the .EML extension, which means other email clients, such as Outlook or Apple Mail can read them, as well.

Announcing the new features in a blog post, Google said that it decided to add it, following user feedback.

“We’ve heard from you that there are situations where attaching emails makes more sense than forwarding separate emails, like wanting to forward multiple messages related to a single topic,” the blog reads.

“With this new functionality, you can do exactly that. Sending emails as attachments allows you to write a summary email message to your recipients, and attach the set of supporting emails that recipients can directly open in their mail client.” 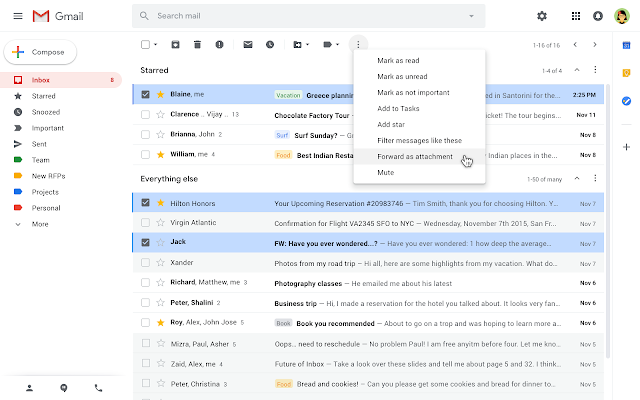 To reply to an existing thread, you can pop-out the compose window and then drag and drop emails to it.

Sead is a freelance technology journalist and blogger with extensive experience. Before turning freelance, he spent more than three years at Al Jazeera’s web editorial. He now reports on 5G, IoT, Cloud, AI and Blockchain for different publications and blogs. He’s based in Sarajevo, Bosnia and Herzegovina and spends his free time trying to explain to his daughter why screaming to get food is not the best strategy.